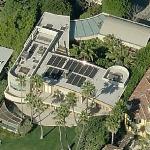 Wells died in a helicopter crash on Easter 1994 while returning from a ski trip in Nevada's Ruby Mountains, he was a good friend of Clint Eastwood who had been skiing with Wells that weekend and had departed in his own helicopter just an hour before Wells' departure. He was buried in Forest Lawn - Hollywood Hills Cemetery. Eastwood sang a tribute of the Beatles Hey Jude to him, which Wells liked to sing on the slopes. The Lion King, which came out the summer after Wells' death, is dedicated to him as well as the named building housing the Disney Archives at Walt Disney Studios.