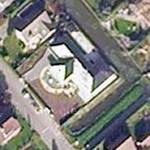 By DonMartini @ 2006-11-02 07:15:42
@ 51.636752, 4.477739
Fijnaart, Netherlands (NL)
Frans Bauer was born December 30th, 1973 in Roosendaal, to father Chris Bauer and mother Wies Bauer. Early in his life his singing talents were already showing. When he was eleven he started singing in the pre-shows of famous singers like Koos Alberts. By the time he was eighteen he had released his first album, but it took two years for it to reach the top of the charts. Since then he has made several Dutch and German albums, and his popularity keeps growing. He met his girlfriend Mariska Bauer (whose name is actually Mariska Rossenberg) in the late 80s when he was performing in a restaurant she worked for. They have two children: Christiaan Bauer (born in June 2001) and Jan Bauer (born in October 2002).
Links: www.fransbauer.nl
910 views