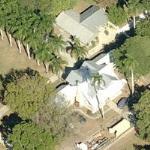 By jdubble07 @ 2011-07-19 08:41:40
@ 26.63369704, -81.88124889
Fort Myers, Florida (FL), US
Henry Ford was a prominent American industrialist, the founder of the Ford Motor Company, and sponsor of the development of the assembly line technique of mass production. His introduction of the Model T automobile revolutionized transportation and American industry. As owner of the Ford Motor Company, he became one of the richest and best-known people in the world.

Ford lived a few hundred feet away from famed inventor Thomas Edison at his winter retreat in Fort Myers, Florida. Edison even contributed technology to the automobile. They were friends until Edison's death.
Links: en.wikipedia.org
1,089 views