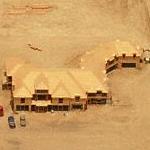 A four-time Pro Bowl selection, Porter earned a Super Bowl ring with the Steelers in Super Bowl XL. He has also played for the Miami Dolphins.