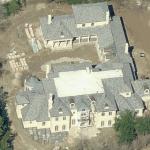 The company recorded $850 million in revenue in 2011. With operations in more than 40 countries worldwide, Frank’s has 3,600 employees.