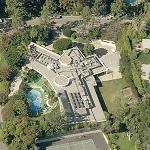 He founded the Larwin Company and served as CEO until retirement.

He founded Com-Air Products, Inc., which engaged in the design, manufacture and assembly of hydraulics, pneumatics and fuel assemblies for jet engines and airframes.

He is a former member of the Board of Directors of the NAHB, and a co-founder of the Master Home Builders Council and the National Council of Housing Producers. He is the former Vice-Chairman of the California State Housing Commission and has served as the former President-elect of the Building Industry Association.