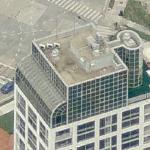 By jdubble07 @ 2012-05-03 06:39:31
@ 25.7578321, -80.19279358
Miami, Florida (FL), US
Leona Helmsley was an American businesswoman and real estate entrepreneur. She was a flamboyant personality and had a reputation for tyrannical behavior that earned her the nickname Queen of Mean. She was promoted by the Beber Silverstein Group and its co-founder Joyce Beber who persuaded her to call herself Queen of the Palace Hotel.

Completed in 1981, Helmsley never moved into the penthouse and soon sold it off to Saudi Shiek Saoud Al-Shaalan.
Links: en.wikipedia.org
960 views