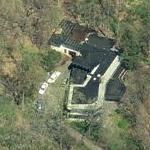 He is best known for inventing guitar playing styles such as licks, chord progressions, and fretting techniques. He was also known for his partnership with his wife, Mary Ford. She died in 1977.