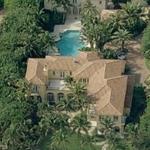 He is also a vegetarian and an ardent animal-rights advocate. The Associated Press has reported that he has found ways to “promote animal rights through the Rockets. Complimentary media meals usually are vegetarian, the team's dance squad sometimes wears ‘Animals Have Rights’ shirts and he outlawed using creature-shaped piñatas during game promotions.” Alexander also places ads for People for the Ethical Treatment of Animals (PETA) in Rockets programs. In 1998 PETA publicly recognized Alexander and his (now ex-) wife Nanci as its largest individual donors. Nanci co-founded and runs the Animal Rights Foundation of Florida, and was instrumental in mobilizing support for the 2002 ballot measure that gave constitutional protection to pregnant pigs in Florida.

His ex-wife's Boca Raton home is mapped on this site.
Links: en.wikipedia.org
2,779 views