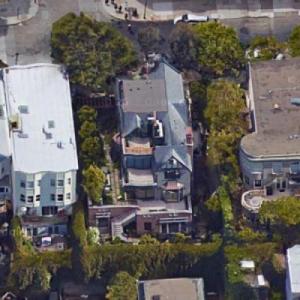 By jdubble07 @ 2013-09-18 12:30:51
@ 37.75671053, -122.42457471
San Francisco, California (CA), US
Mark Zuckerberg purchased this home at Fair Oaks on 21st street in San Fransisco late 2012. Zuckerberg paid a whopping $9,990,000 for the 5,542 square foot mansion which was just over 8x what it sold for in 1997. Zuckerberg actually purchased the property through the legal entity SFRP LLC, and listed a Cary S. Collins as the main beneficiary. He and wife Priscilla Chan spent millions renovating the property. Neighbors held animosity towards Zuckerberg once they realized 2 security guard cars were constantly parked out front in the public parking spots. Their main home lies in Palo Alto which is very close to Facebook headquarters.

Mark Zuckerberg is an American computer programmer and internet entrepreneur. He is best known as one of five co-founders and CEO of the social networking website Facebook. Initially created as a live photo directory for his college at Harvard, Zuckerberg knew Facebook could be bigger. He and a team of his friends worked hard to branch it out to several other schools. In 2004 they established an office in California, always planning to return to Harvard. Instead, they stayed and grew the Facebook empire there in California, turning down offer after offer to purchase Facebook. In 2010, just 6 years after launching Facebook, the company had 500 million users.

Zuckerberg met his wife, Priscilla Chan, at a Harvard frat party. They got married on May 19, 2012. In 2015 they had their first baby girl after several miscarriages. They went on to have another baby girl in August of 2017. The couple are known for their generosity and philanthropy. They've donated hundreds of millions to education, fighting Ebola, and 18 million shares ($990 million roughly) to the Silicon Valley Foundation which was recognized as the largest charitable gift on public record in 2013. Zuckerberg and Chan have vowed to donate 99% of their wealth away, which is estimated at $55 billion.

Zuckerberg has a net worth of $66.3 billion, making him the 3rd richest person in the world.
Links: en.wikipedia.org
35,110 views