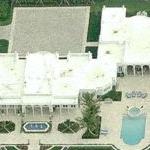 Their son, Geoffrey Caraboolad, is a real estate developer and the founder and president of Metric Corp., a construction management company based in Boston, Massachusetts. His Palm Beach home is also mapped on this site.
4,095 views