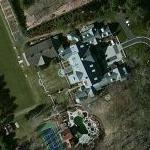 This property was previously owned by the musical team of Ashford and Simpson, which is also featured on this site. The present home, in its current state, is only visible through the Arial view and not the Birds-Eye-View (BEV), which still shows the old house.

The current home, which was built in 2008, is situated on 7.53 acres and has a current appraised value of $19,753,300, down from $23,220,100 in 2010. The home has a total of 12 bedrooms, 15 full bathrooms, and 5 half baths, as well as a sauna. There are a total of 45 rooms in the home. The home has 8 fireplaces. The home measures in at 29,513 square feet, making it one of the largest homes in the state of Connecticut; the first floor alone measures in at 17,127 square feet. The total gross area of the home is 65,524 square feet, which if counted would make it one of the largest homes in the country. Additionally, there are two other small buildings on the property containing additional guest bedrooms and bathrooms.

"A 2006 profile on the company reported that it had about 200 employees in the United States and 1,000 in China, and that the company has had double digit growth every year for the prior 18 years."
Links: en.wikipedia.org
26,110 views