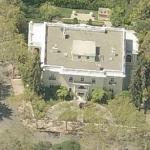 Ross Stores is an American chain of off-price department stores headquartered in Dublin, California. It is the largest off-price retailer in the United States. As of August 2015 Ross operates 1,254 locations in 33 U.S. states, the District of Columbia and Guam.