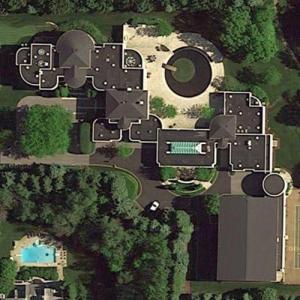 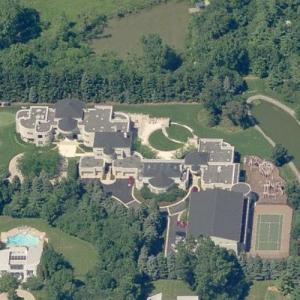 By nic @ 2005-04-19 00:01:21
@ 42.20187018, -87.83753064
Highland Park, Illinois (IL), US
Michael Jordan's house, located in the Highland Park suburb of Chicago, is a 56,000 square foot mansion that started construction in 1991 and was completed four years later in 1995. It sits on 7.39 acres and includes 9 bedrooms, 15 full bathrooms, 4 half bathrooms and a regulation-size NBA-quality basketball court. The estate is surrounded by a "fence" of evergreens. The garage is 4,289 square feet, larger than many single-family dwellings, and fits 14 cars. Other amenities include a billiard parlor, fireplace, library, high-tech gym, cigar room and the original doors to the Chicago Playboy Mansion. The grounds include a tennis court, chipping range, putting green and a lily pond. The front gate has a giant "23" logo on it -- Jordan's former number when playing with the Chicago Bulls. Property taxes were $180,927 in 2011.

Michael Jordan's net worth is estimated at $650 million, according to Forbes. Jordan's empire grew from his $90 million salary from the Chicago Bulls and his numerous endorsements including Nike, Wheaties, Gatorade, Hanes, MCI, Chevrolet, McDonald's and Coca-Cola. His endorsements still reportedly earn him $80 million a year. Michael Jordan also owns an 80% stake of the Charlotte Bobcats NBA team. He privately owns a $50 million Gulfstream IV jet.

Michael Jordan's 2002 divorce to his wife of 13 years, Juanita Jordan, cost him $168 million in the divorce settlement.

Michael Jordan’s numerous other real estate properties are listed on VirtualGlobtrotting as well, including real estate in Miami (FL), Jupiter (FL), Cornelius (NC) and the 7th floor of The Trust building in Charlotte (NC), where his Bobcats team plays.
Links: en.wikipedia.org, www.celebritynetworth.com
423,515 views