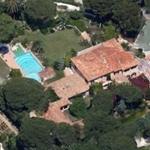 Al-Fayed is the father of the late Dodi Al-Fayed, who died along with Diana, Princess of Wales in 1997. Dodi and Diana vacationed here just a few days before their deaths and were famously photographed kissing aboard their yacht in the waters just off the coast.

Mohamed Al-Fayed is now selling this property along with his separate beach house (also mapped on this site, just across the street) for a combined £70M. The two properties feature this 30-room main house, a nightclub, indoor pool, two waterfront outdoor pools, and private cinema.
Links: www.dailymail.co.uk, en.wikipedia.org
2,259 views