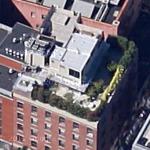 He is notorious for his parties at this triplex he bought in 2010 for $5.5 million. He bullishly boasted to the mag, “The recession has been great for me.”
Links: en.wikipedia.org
599 views