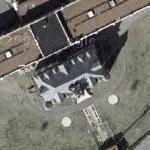 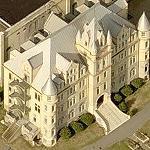 By 1JonKing @ 2008-12-09 11:13:34
@ 36.175853, -86.864933
Nashville, Tennessee (TN), US
The proposed prison design called for the construction of a fortress-like structure patterned after the penitentiary at Auburn, New York, made famous for the lockstep marching, striped prisoner uniforms, nighttime solitary confinement, and daytime congregate work under strictly enforced silence. The new Tennessee prison contained 800 small cells, each designed to house a single inmate. In addition, an administration building and other smaller buildings for offices, warehouses, and factories were built within the twenty-foot (6.15m)high, three-foot (1 m) thick rock walls. The plan also provided for a working farm outside the walls and mandated a separate system for younger offenders to isolate them from older, hardened criminals.

Sissy Spacek portrays Marie Ragghianti, the woman who blew the whistle on the Ray Blanton administration, in the 1986 feature Marie. This film marked the screen debuts for two of Tennessee's biggest stars: the Tennessee State Penitentiary and Fred Thompson (now a U.S. senator). Once slated for demolition, the prison has become a popular movie set; the HBO film Attica (1996) was recently shot there. In 1999 came the release of the Tom Hanks movie The Green Mile, which prominently featured the state prison.

The prison was the setting of a couple episodes of VH1's Celebrity Paranormal Project, which is similar to MTV's Fear with the exception that celebrities are used as the "investigators." In 1977, country musician Johnny Cash performed the televised concert, A Concert: Behind Prison Walls, in the prison with Linda Ronstadt, Roy Clark, Foster Brooks and Carl Perkins. It was most recently used as the setting for the 2006 horror film, Furnace. Other films shot there include The Last Castle, A Letter From Death Row, Last Dance, Ernest Goes to Jail, and Nashville.
Links: en.wikipedia.org
8,592 views

Anonymous
@ 2009-01-26 20:59:44
This place is deffinately haunted me and a couple of my freinds were out one night and we saw it so we asked the gaurd at the gate if we could get a tour or something he said no. so we parked at the pilot. we snuck acrosss the train tracks and got in through the whole in the wall on the side. we heard banging of walls and slaming of cell doors. we then decided to leave after being in there all of 10 minutes. an awesome place to checkout though just dont get caught lol