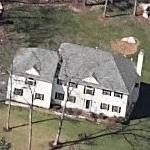 Rezwan Ferdaus, 26, is accused of also attempting to provide support and resources to al Qaeda so it could attack U.S. soldiers overseas.
Links: www.metrowestdailynews.com
1,015 views