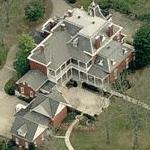 By Champion3 @ 2010-11-04 09:49:56
@ 36.09752359, -86.87724995
Nashville, Tennessee (TN), US
Robert Butts is co-founder of Southpoint Capital Advisors, a New York-based hedge fund. The fund has more than $1 billion in assets under management, according to his bio with Adherex Technologies, a North Carolina-based biotechnology company researching cancer treatments. Southpoint has a substantial stake in the company and Butts sits on the board.