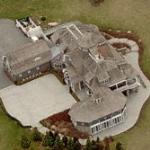 By jdubble07 @ 2010-10-04 16:51:55
@ 41.45832627, -71.31739814
Newport, Rhode Island (RI), US
Emily Harper, granddaughter of Charles Carroll of Baltimore, commissioned a mansard-roof cottage with continuously shingled walls and roof from the then-popular Providence architect Thomas Tefft. The same year, Harper and her mother provided most of the money to erect St. Mary’s Church in Newport by the architect Patrick C. Keely. The house was subsequently sold to John M. Fields of Philadelphia and re-baptized “Seafields.” The George Henry Warrens of New York subsequently owned the property through World War II. Following the War, the house was leased seasonally and its last occupants were the owners, crew, families, and staff of the British challenging yacht for the America’s Cup, The Sovereign, in 1964. Known popularly as “Mildew Manor” by these tenants, Seafield was demolished in 1966. A new house was built on the land in 2000.
Links: en.wikipedia.org
2,374 views