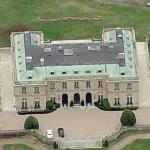 Shortly before his death, George Widener had commissioned Horace Trumbauer to design and oversee construction of Miramar, a 30,000 sqft French neoclassical-style mansion. His widow, Eleanor Elkins Widener, who was rescued in a lifeboat from the Titanic, completed the project and construction was undertaken during 1913 and 1914 and opened to friends with a large reception on August 20, 1915.
Links: en.wikipedia.org, realestalker.blogspot.com
1,831 views