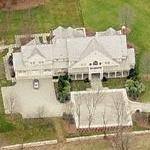 By Turneasterne @ 2012-01-22 16:20:30
@ 41.33824154, -73.56883464
North Salem, New York (NY), US
This is the North Salem, NY home of Steven L. Rattner and Maureen White. Steven Rattner is an American financier who served as the lead auto advisor (popularly known as the "car czar") in the United States Treasury Department under President Barack Obama. Prior to his government service, he was a co-founder and managing principal of the Quadrangle Group, a global private equity firm specializing in the media and communications industries. He previously spent two decades as an investment banker at Lehman Brothers, Morgan Stanley, and Lazard Freres & Co., where he rose to Deputy Chairman and Deputy Chief Executive Officer. Rattner began his career as a reporter for The New York Times, principally as an economic correspondent in New York, Washington and London.

Rattner is currently chairman of Willett Advisors LLC, the investment firm that manages New York Mayor Michael Bloomberg's personal and philanthropic assets. He continues to be deeply involved in public policy matters, including as a Contributing Writer for the Op-Ed page of The New York Times, as the author of a monthly column for the Financial Times, and as the economic analyst for MSNBC's Morning Joe.

2010, Rattner spent time fighting an investigation of his and Quadrangle's activities in relation to a "pay-to-play" scandal in New York State. The investigation dealt with Quadrangle's efforts to manage investments for the New York State Common Retirement Fund through payments to New York State Comptroller Alan Hevesi’s political consultant, Hank Morris, as a "placement agent". The charges of the then-Attorney General Andrew Cuomo were that two dozen investment advisors including Quadrangle allegedly paid fees to the Intermediary Hank Morris and did favors for pension officials in order to enrich themselves. Both Morris and Hevesi were sentenced to prison in 2011.

Rattner has served as a board member or trustee of a number of public and philanthropic organizations, including the Educational Broadcasting Corporation as chairman, Mayor's Fund to Advance New York City as chairman, Metropolitan Museum of Art, Brown University, Brookings Institution and the New American Foundation. He is a member of the Council on Foreign Relations. Rattner is married to Maureen White, who served for five years as finance chair for the Democratic National Committee and is now the Senior Advisor on Humanitarian Issues to the Special Representative-Afghanistan and Pakistan for the U.S. Department of State. They have four grown children.