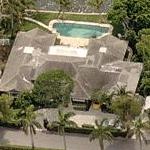 By Champion3 @ 2010-07-25 00:19:47
@ 26.69495143, -80.04067981
Palm Beach, Florida (FL), US
Theodore A. Bell III is an American author of suspense novels such as Hawke and Assassin, "Pirate", and "Spy." He is best known for his New York Times Bestselling series of spy thriller novels featuring the character Alex Hawke. Before becoming a novelist, he was President and Chief Creative Officer of the Leo Burnett Company. He was later named Vice-Chairman of the Board and World-Wide Creative Director of Young & Rubicam, one of the world's largest advertising agencies. At age 25, he sold his first Hollywood screenplay, 'Screamathon' to producers Joel Michaels and Garth Drabinsky. He was aslo briefly an adviser to the U.S. Department of State. His wife, Page Lee Hufty, is a painter.
Links: en.wikipedia.org
782 views