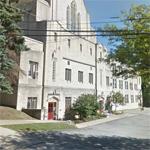 St. Paul's Episcopal Church was the filming location for the support group meetings. The majority of the movie was filmed in the Pittsburgh area, with other scenes filmed in Amsterdam.

Filming in Pennsylvania took place from August to October 2013. The Google street view car photographed this area in September 2013, but there is no evidence of a film crew at the church on this day.
Links: en.wikipedia.org, www.post-gazette.com, www.youtube.com
702 views