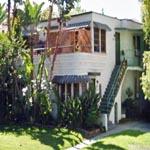 Gary (Monoson),Rick (Antin), and David (Joe Rubbo) stop by Carmella's (Louisa Moritz) apartment for a sexy afternoon pizza party and get more than they bargain for.

Even though the film was released 30-years-ago, the apartment building looks the same as when they filmed here in the early 80s.

Please keep in mind that this is a private residence. Please don't trespass on their property, knock on the door, or disturb the residence.
Links: www.imdb.com
982 views