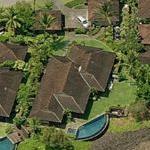 By Champion3 @ 2013-05-14 22:58:32
@ 19.81870699, -155.99106161
Kailua, Hawaii (HI), US
Thomas Kell Montag is co-COO of Bank of America. which in 2010 was listed by Forbes as the third biggest company in the world. He was the former head of trading at Goldman Sachs. While there, Montag famously called the mortgage-linked investment “one shitty deal”. For several years, he has made more money than his boss, BOA CEO Brian Moynihan. He turned heads in early 2008 when he snared a $40 million pay package upon joining Merrill Lynch after a heavy recruitment effort by the CEO at the time, John Thain, his former colleague at Goldman. Later that year, he got another $40 million package to replace his Goldman stock. In 2008, he paid $32.5 million for a six-story townhouse on New York's Upper East Side. He holds a degree from Stanford and an MBA from Northwestern University and sits on the board of BlackRock, the world's largest asset manager.
Links: www.businessinsider.com
2,377 views