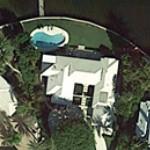 When the likes of billionaire hedge fund titan Stanley Druckenmiller, retired GE CEO Jack Welch or Home Depot founder Ken Langone purchased homes in Lost Tree Village, little did they know that one of their neighbors would be Toronto's mayor, not Rob Ford but John H. Tory. Actually Jack sold his vacant property across the road from Mayor Tory's house to the CEO of Johnson & Johnson for a cool $8.4 million back in the depths of the financial crisis in 2009. Jack Nicklaus and members of his family call Lost Tree Village home as do prominent Canadians such as Michael Koerner, Jacques Bougie and Nadir Mohamed to name just a few.

Toronto's mayor has had a home in Lost Tree since 2000 having traded up to his current house back in 2008 (home is in his wife's name B J Hackett). The village has less than 600 residences on a 450 acre site bounded by the legendary Seminole Golf course, MacArthur State Park, Lake Worth and the Atlantic ocean. Commensurate with the status of its residents, Lost Tree is regarded as one of the most secure gated communities anywhere. Palm Beach International is a 20 minute drive and a convenient location for those residents who need a place to park their Gulfstream or Global Express private jets with New York, Boston or Toronto just over 2 hours away.

The center of activity at Lost Tree is it's club which offers golf, tennis, a beach club and casual, fine or private dining options for its members; a new fitness center opened in 2013. Membership like most clubs of this caliber is by invitation and subject to approval with property ownership at Lost Tree mandatory. http://www.flickr.com/photos/106657605@N04/10483467056/in/photostream/

Mayor Tory's Lost Tree residence is modest by Palm Beach standards, a bungalow of less than 4,000 sq ft. The house fronts on the northern tip of Lake Worth also known as Little Lake Worth, which is a favorite for fishermen, nature lovers and boaters with its natural setting and easy access from the inter-coastal or the Atlantic. Little Lake Worth is a prime location for observing Manatees, birds and aquatic life. Unlike Mayor Tory's predecessor Rob Ford, the only way reporters, vacationing constituents or paparazzi will be able to get a glimpse of this Toronto mayor's Florida home is if they hire a boat and drop anchor in the public waters adjacent to his home. Approaching by land will require require an invitation and clearance by village security.

Google Street View not available for this location.

An image with mayor John Tory's home in the foreground:
http://www.coastalsir.com/localimagereader.ashx?&ImageURL=siteresources/my%20folder/blog%20images/lost%20tree%20village.jpg

Links to maps of mayor Tory's other homes: