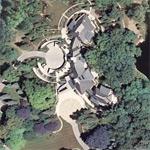 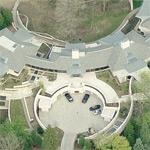 By neotrix @ 2008-05-07 03:57:24
@ 42.575517, -83.263493
Bloomfield Hills, Michigan (MI), US
The chairman of Guardian Industries Corp., one of the world's largest manufacturers of architectural and automotive glass lived here until his death in March 2009. He was a professional sports owner who was the principal owner of the Detroit Pistons of the NBA, the Detroit Shock of the WNBA, and the owner of the Tampa Bay Lightning of the NHL.
Links: en.wikipedia.org, www.yyarchitects.com
29,235 views

Anonymous
@ 2016-08-27 18:52:21
My brothers and I did much of the stonework on this house. It is quite something to behold. Half court basketball court in the center of the home on the lower level. Beauty salon, and the Davidsons bought a house a few houses to the north, tore it down and built a beautiful and rather large home for Mrs. Davidson's daughter, and her husband.

The house two parcels to the north,, supposedly for Mrs. Davidson's daughter and husband, was also designed by Young and Young. See the links below.

bikelane
@ 2022-08-28 22:43:39
After further review the link that I posted for this home does not match, unless major modifications were made. The two homes are similar their circular circular shapes, but the roofs are clearly different. The Young and Young home, "Bloomfield Hills 09" according to their website, appears to be neoclassically designed, where as 4475 Lahser Road appears to be contemporary, according to the aerial imagery.

US Modernist states that the home was designed by Young and Young (search for 4475 Lahser Road and images of the house pops up), but Young and Young's website does not have a project whose pictures match the home.