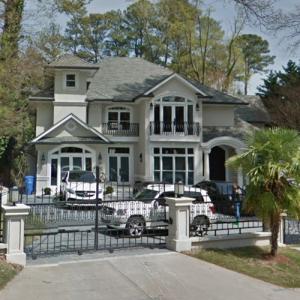 By Xeba73 @ 2017-11-25 16:20:40
@ 33.8504761, -84.3563787
Atlanta, Georgia (GA), US
The party mansion of the one and only Jeffery Lamar Williams better known professionally as Young Thug. The American rapper, singer, and songwriter lives in this gorgeous Georgia mansion. With a voice as unique as his sense of style and fashion, he first received mainstream attention after collaborations with rappers Rich Homie Quan, Birdman, and Gucci Mane.

The rapper reportedly bought the mansion for less than $2.5 million, but was sued last year by Heritage Select Homes, after claims that the rapper didn't make a giant $2.2 million payment on the home in 2017. The original price of the mansion was $2.475 million, but the rapper allegedly only made small payments before the major payment was due.

In his response, Young Thug claims that Heritage knew the home had a series of flaws but failed to disclose them. Saying they tried to sell the rapper a faulty home. Among the alleged problems, he claimed foundation damage, roof problems and damaging leaks, and mold in the basement below the indoor pool.

Young Thug is stacking it up, with a net worth of over 3 million. Still relatively new to the rap game, the staying power of his career remains to be seen. A common feature artist, Young Thug has yet to really break into the charts with a single of his own. Havana, released in 2017 did well, but fans haven’t seen a strong follow up, with mainstream appeal yet. With writing credits on several successful albums since, it's possible Young Thug moves to a more production oriented career.
Links: en.wikipedia.org
41,503 views