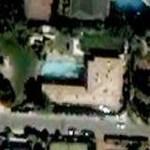 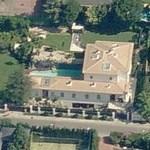 By DonMartini @ 2008-04-05 04:20:19
@ 40.452263, -3.635144
Madrid, Spain (ES)
Zinedine Yazid Zidane (born 23 June 1972 in Marseille), popularly nicknamed Zizou, is a French professional footballer of Algerian Kabyle Berber descent. A midfielder, he was a member of the French national team that won the 1998 FIFA World Cup and Euro 2000, and was also the recipient of the Golden Ball where he captained the French side to the 2006 World Cup final; a match that saw his career end in controversy after he was sent off for headbutting Italy defender Marco Materazzi.

He played for four European clubs, including Juventus and Real Madrid, with whom he won Serie A and La Liga championships, including lifting the 2002 UEFA Champions League trophy with Real after scoring the match-winning goal. One of only two three-time FIFA World Player of the Year winners (Ronaldo the other), he also finished in the top three an additional three occasions, and was also named European Footballer of the Year in 1998. In 2004, fans voted him atop UEFA's fiftieth-anniversary Golden Jubilee Poll, and he was included in Pelé's selection of the 125 greatest living footballers.