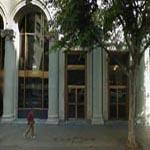 In "Seven" this building was disguised as the gloomy library in which Det. Somerset (Morgan Freeman) looks up the Seven Deadly Sins in this old Bank of America building.

This well-used location has been featured in such films as, John Schlesinger’s "Marathon Man," "Ghost," with Patrick Swayze and "The Mask," starring Jim Carrey

Other movies shot here include, "St Elmo’s Fire,""Spider-Man 2," and it’s also the law firm office where Lily Tomlin jumps into the body of Steve Martin in "All Of Me." You might also recognise it as the exterior of ‘Belle en Blanc’, the impossibly posh bridal store from "Bridesmaids."
Links: en.wikipedia.org, moviemaps.org
773 views