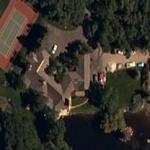 Flavy is an oilman and consul to Gambia.

Flavy was host to a part for 2 friends to reconcile, which turned violent when one man came back with an AR-15 and killed the other man.

"Michael Hernstadt, who was 42 when he died, moved to Aspen in 1965 with a lot of money and an affinity for politics and partying. Keith Porter, who was 37 when he shot Hernstadt, was a former sniper in Vietnam who ran a local sex and head shop called Dr. Feelgood’s. Both were known cocaine and alcohol abusers, as well as former friends who had been in trouble over the years with local police for various acts of assault and violence.

In December of 1983, they had come to blows in Porter’s apartment, and Hernstadt had gotten the best of it. A small, all-night party the following April 23 at the home of well-known host Flavy Davis was the scene of a proposed truce between the two men that had been brokered by local pianist and singer Bobby Harrison. By Tuesday morning, the truce had disintegrated in the wake of hours of booze and bumps. Porter left the house, returning soon in a rented Ford Bronco, carrying an AR-15 assault rifle.

Harrison and Hernstadt were driving away from the Davis home on Silver King Drive when Porter shot Hernstadt in the chest through the window of Harrison’s red Honda. Hernstadt reportedly asked Harrison to drive him to the hospital, but Harrison stopped the car and fled. Porter, who advanced on the car from his position 200 yards away on Red Butte, emptied two clips into both the car and Hernstadt, many of the shots coming at point-blank range. Mick Ireland, reporting for The Aspen Times, graphically described Hernstadt as being “literally blown to pieces.”
Links: www.aspenhalloffame.org
1,812 views