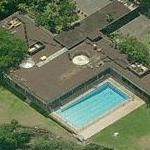 By Champion3 @ 2010-12-13 18:33:58
@ 21.26795338, -157.70889645
Honolulu, Hawaii (HI), US
Fred Chan is a technology entrepreneur who made a fortune in Silicon Valley pioneering sound chips for computers, toys and other products. In 1995, his company ESS Technology Inc. raised over $120 million in an initial public stock offering that at the time ranked as one of the largest IPOs in the semiconductor industry. Shortly afterward, Chan became a major investor in Hawai'i real estate. In 2007, Chan resigned as chairman of the board of the company he started in 1984 to focus on philanthropic pursuits. The next year, ESS was acquired by a private investment firm.

This house was once the estate of industrial magnate Henry J. Kaiser, the founder of Kaiser Permanente, the largest managed care organization in the United States. The boathouse, also part of the property, has housed guests such as Lyndon B. and Lady Bird Johnson and Jackie Kennedy. The property was listed for sale with an asking price of $80 million.