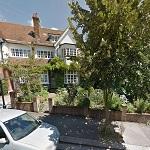 By Gorecki @ 2015-06-07 19:48:18
@ 51.550569, -0.188789
London, United Kingdom (GB)
This is where the British actress Imelda Staunton lives with her husband and fellow actor Jim Carter. She was nominated for an Academy Award in 2005 for her role in Vera Drake. She also won a BAFTA Award for the role. Her other film roles include Pride, Harry Potter, Arthur Christmas, Another Year, Taking Woodstock, Nanny McPhee, Chicken Run and Shakespeare in Love. She has also won three Olivier Awards for her extensive stage work.
Links: en.wikipedia.org
7,089 views