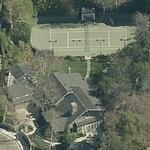 The compound has an interior designed by noted designer Madeline Stuart and architects Tichenor & Thorp. The property also featured a pool and a tennis court on more than 1 acre.

McHale's previous residence in the Hollywood Hills (which he still owns) is also featured on this site.
Links: www.tichenorandthorp.com, en.wikipedia.org
2,645 views