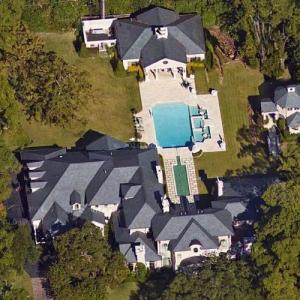 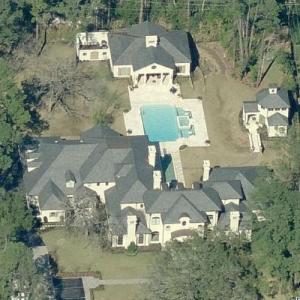 Joel Osteen is an American preacher, televangelist, and author of New York Times Bestselling books. He is most recognized as the Senior Pastor of Lakewood Church, in Houston, Texas, the largest Protestant church in the United States. Joel, born March 5, 1963 took over preaching at the church soon after his father passed away from a heart attack in 1999. The church was started by Joel’s dad, John, in 1959, in the back of an old feed store. Under Joel’s leadership, the attendance of the church rose from 5,000 people to 43,000 weekly. The large attendance numbers lead to the church renovating the old home of the Houston Rockets and was a 105 Million Dollar investment. It took 15 months to complete and included adding an additional five stories. Joel used his limited communications background to help produce and televise his father’s sermons. Today, Joel’s sermons are seen in over 100 countries. It is believed that the church brings in over $32M a year in donations.

The home of Joel and Victoria Osteen is 17,000 square feet. The home is situated on 1.86 acres surrounded by an ornamental fence. The Osteens and their two kids, Jonathan and Alexandra, share six bedrooms and six bathrooms, three elevators, and five fireplaces. The estate also boasts a one bedroom guest house and a pool house.

Joel Osteen is estimated to be worth $40 Million. He has not drawn a salary from the church since 2005 and his income is based on his best-selling books and related products such as calendars, daybooks and inspirational pamphlets. The sales from his books and related items are estimated to generate $55M a year. His second book was rumored to have brought him $13M.
Links: en.wikipedia.org, www.christiantoday.com, www.celebritynetworth.com, houston.culturemap.com
434,146 views

Anonymous
@ 2021-07-06 11:58:04
I, find the extravagance of the Osteens is a testament to greed. Those given much are to share much, and this is biblical. Jesus & Paul spoke of spreading the words of God and to give all for a prophet will be provided for along the way. Reality if Joel & Victoria are true prophets of God they would share & exemplify ALL of Gods words.

Anonymous
@ 2021-08-05 18:15:50
I look at all this mansions and think "How much of their millions of donations go to charities.
It has to take millions to keep up the house, plane, clothing, etc. Maybe he could house some of the immigrants coming across the border. Jesus would. What different life styles with Olsteen and Jesus. I cant believe people support a greedy pastor and follow him....sad

Anonymous
@ 2021-10-28 15:09:10
People that are on here criticizing the Osteens, you have no idea how much they give and help others. If you read the article, he hasn’t taken a salary in over 16 years and his money comes from the sale of his books and other products! Why shouldn’t God’s people have wealth and prosperity? People like Bill gates and other heathen can live in homes like this And fly private jets but that’s okay?!? Read your Bible. God desires health AND PROSPERITY for His people! Even the children of Israel came out of Egypt with all of their wealth! Abraham was Loaded with wealth and we have a better covenant. Joel osteen has done more for people than any of you critics. Stop bashing ministers of God and start actually reading the Bible and become a generous giver, and you might prosper too!