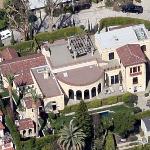 In 2004, fashion designer Sue Wong paid $5.4M for this home, the most ever paid for a home in Los Feliz.
Links: movielanddirectory.com
5,807 views