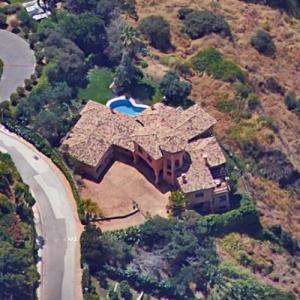 By Xeba73 @ 2017-12-03 02:54:11
@ 36.51579933, -4.99010744
Marbella, Spain (ES)
Skier, YouTuber, and entrepreneur Jon Olsson’s house was a traditional Spanish villa in Marbella, Spain in the Costa del Sol resort region. The home features a gym, infinity pool, and incredible views of the Spanish coast. In 2018, Olsson and his wife, blogger and model Janni Olsson Delér, performed a total renovation, updating every room of the house and giving it a more Boho-Scandinavian style. The renovation was thoroughly documented via the Olsson’s blogs and YouTube channels. In August, 2021, they announced on YouTube that they had sold the home and subsequently moved to Monaco, where they currently reside with their son, Leon and daughter, Leia. The Olsson’s had previously owned a home in Marbella which was sold for €1.7 million in 2017.

Jon Olsson’s net worth is $8 million. His is a freestyle skier and ski racer who has won eleven medals at the Winter X-Games. In 2005, he began hosting a big air event known as the Jon Olsson Invitational. As a skier, Olsson is known for being the inventor of several new tricks, including the DJ flip, hexo flip, kangaroo flip, and the tornado.

Olsson is very active on social media, documenting his life and career through frequent vlogs. His YouTube and Instagram accounts have over a million subscribers. Olsson has founded a bag company called Douchebags and a clothing company, C’est Normal.

Janni Olson Delér’s net worth is $1.2 million. She is a model, blogger, and influencer with 1.4 million Instagram followers. She has worked with major brands such as Nikon, Maybelline, and Calvin Klein. She and Jon Olsson were married in 2018.
Links: en.wikipedia.org, virtualglobetrotting.com, steemit.com, www.celebritynetworth.com, janniolssondeler.com, www.webofbio.com, zocohome.com
69,439 views