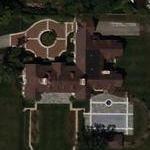 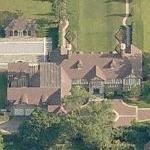 By tlp333 @ 2009-03-01 16:40:29
@ 42.246499, -87.840822
Lake Forest, Illinois (IL), US
Laurence Tureaud better known as Mr. T sold this controversial estate in 2003 for $3.85Million. The actor best known for his roles as B. A. Baracus in the 1980's television series "The A-Team", as boxer Clubber Lang in the 1982 film "Rocky III", and for his appearances as a professional wrestler, clear cut some 100 trees here, to the chagrin of the local populace. He purchased the 9-bed, 9.5-bath, 15,000 sq ft home in the 1980's, and then cut down so many trees on the property local residents would go on to pass tree protection legislature to prevent such landscaping debacles. Mr. T eventually left the neighborhood, selling the house to a pair of developers operating under the Legacy Preservation Partners LLC who acquired the property for just under 4 Million. The site of the so called ‘chainsaw massacre’ was also speculated to be interested in by Jennifer Aniston, who looked at buying this property in 2006 to be closer to her then boyfriend, Vince Vaughn. Instead it was eventually sold to the current owners Neil and Jane Cummins in 2009 for a little more than $4.5 Million. Again relisted in 2017 for some $7.9 Million.

The estate, formerly Two Gables, was owned by meat tycoon Laurance Armour and his family, but the family eventually sold the property to the man himself Mr. T, in 1986 for $1.7 million. The following year, Mr. T pitied the tree, and cut down more than 100 ancient trees on his extensive property. Mr. T hired a crew of landscape workers and was rumored to have personally assisted in the removal of dozens of oaks, elms and maples alike. Residence were so shocked at what they felt to be nearly historic landscaping, including complex topiaries, they drafted laws to prevent future clear cutting. Looks like Lake Forest couldn’t handle a little vitamin T.

When the developers eventually took over took over the estate in 2003, they set to restore the seven-acre grounds. They tore down the controversial stockade fence which T had been ordered to sandblast once by city council, as it’s aesthetics offended the city. And they planted new trees and renovated the house. Inside, they stripped everything that Mr. T's had done to make it his own. No more red shag carpeting. No more black and red toilets. They also restored the elevator, and added a 5,000-square-foot addition to the original 10,000-square-foot house.

From here the estate was finally sold in 2009 to the current owners, Neil and Jane Cummins, for $4.625 million.

Mr. T hasn’t spent much time in the public eye since 1995 when doctors diagnosed the actor with T-cell lymphoma, a cancer that has yet to take the fight out of Mr. t. Still one of the most iconic performers, Mr. T remains a beloved figure in the hearts of many. He may have butt heads with Lake Forest, but not everyone can handle Mr. T. Over the course of his remarkable career, he earned a net worth of $1.5 Million.
Links: archive.bebo.com, www.femalefirst.co.uk, www.forbes.com, www.bergproperties.com
18,265 views