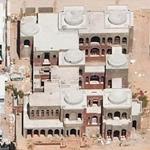 But, as you can see, the home was never completed.
Links: en.wikipedia.org
1,946 views