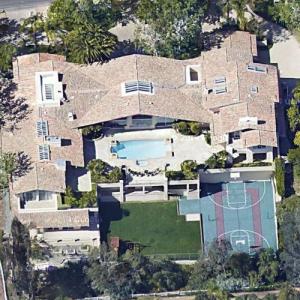 Paul George is a small forward for the Indiana Pacers NBA team and a four-time NBA All-Star. He purchased this Hidden Hills mansion for $7.4M in 2016. As an American professional basketball player for the Los Angeles Clippers of the National Basketball Association he earned a six-time NBA All-Star and five-time All-NBA Team selection, and became a four-time member of the NBA All-Defensive Team. Paul George is one of the greatest players in the game, and a all star on the court, known for explosive plays and huge baskets.

This beautiful $7,400,000 mansion sold after 10 years on the market to the basketball superstar Paul George. The 15,973-square-foot colossus was built in 1989 and contains a total of 7 bedrooms and 8 bathrooms. Sitting on just over 1.44 acres of land, this massive mansion looks almost like a sports complex. Offering fantastic and incredible views out over the neighboring hills of Calabasas this home is quite a piece of work. Featuring a prominent, 4,000-square-foot so called ‘great room’, with floor to ceiling glass windows. The home also has a game room/lounge, a wood-paneled library, and a home theater. The neighborhood is highly in demand right next door to vin scully.

Paul George has earned a net worth of $60 Million over his superstar career. His average salary is $20 Million a year, but he often makes bonuses for great performances. In 2014, Paul George earned a reported $7 million bonus from the Pacers, after he put up incredible postseason numbers, scoring an average of 22.6 points per game with 7.6 rebounds. Between June 2017 and June 2018, Paul George earned $30 million between salary and endorsements which makes him one of the highest paid basketball players on the planet. Roughly $8 million of his income comes from endorsements.
5,749 views