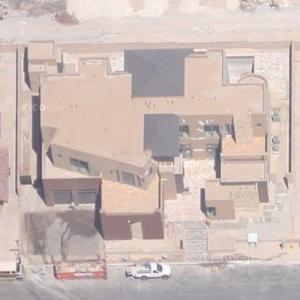 By jdubble07 @ 2018-04-24 15:26:32
@ 36.258722, -115.309154
Las Vegas, Nevada (NV), US
DJ Pauly D, the famous DJ and television personality best known for his time on The Jersey Shore, lives in this amazing Las Vegas compound. Now a successful DJ and TV star, Pauly has been living the high life since his rise to stardom. Perhaps the most iconic star of Jersey Shore, next to Snooki, Pauly is well known of his pranks, antics, and various catchphrases.

While his origins were in reality TV, Pauly has made a lot of moves to legitimize his music career. Even in the early days of the shore, Pauly made it clear he had his sights set on becoming a great DJ. His dream has since come true, having recently signed a 3 record deal with 50 Cent’s record label, G-Unit Records and securing an exclusive regular spot at a Las Vegas resort.

Now a single father, Pauly has since the Jersey Shore had a child. The mother and his child still live outside long island. There are some reports of a custody battle.

The perfect mansion for the Gym, Tan, Laundry lifestyle, this home has all the amenities that Pauly could need. Including a room dedicated to keeping the DJ looking fresh, with a tanning bed, oils, and exercise equipment. His game room game room features a basketball hoop, air hockey, and eighties retro arcades.The garage is full of cars and motorcycles including a $450K Lamborghini Aventador Roadster and a white Bentley both complete with the vanity plate 'PAULYD'.

Wildly successful as a TV personality in the wake of the Jersey Shore, Pauly D has earned a net worth of $20 Million, pulling in around $150 thousand an episode. Certainly the DJ has come a long way from making $200 a week while filming the first season of the Jersey Shore. Now he is the highest paid cast member, with the highest net worth, with Snooki in second at $4 million. Pauly also spins at the Moon, Rain, and Palms Pool at the Palms Casino and Resort.

He’s made a name for himself, and is truly living the dream. In his own words, taken from an MTV Cribs profile, 'I'm telling you, I'm the number one guido, and I still am. Killing it!'
Links: en.wikipedia.org
74,289 views