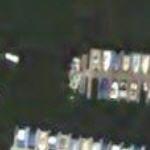 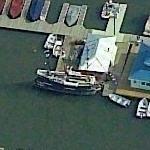 The Time Bandit, a 1/3-scale replica of a 17th-century English three-masted galleon, is now sailing the waters of Big Bear Lake, CA.

The ship — built by a father and son team over nearly ten years — was used as a prop in numerous music videos and Terry Gilliam's 1981 film Time Bandits, hence its name. Formerly berthed at the San Diego Maritime Museum, it has been re-launched in Big Bear Lake as tourist attraction and cruise boat.

The Big Bear Lake Resort Association has spiced up The Time Bandit's image by labeling it "an authentic pirate ship" and advertising its live entertainment, cocktails and refreshments, and "crew of authentic pirates
Links: www.redlandsdailyfacts.com
1,546 views