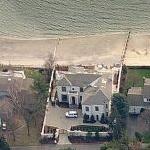 Stew Leonard's, Inc. operates dairy and grocery stores in the United States. Stew Leonard's, Inc. and is based in Norwalk, Connecticut. The company also has stores in Danbury, and Newington, Connecticut, as well as in Yonkers, New York. The television show Ripley's Believe It or Not! deemed Stew Leonard's as "The World's Largest Dairy Store." It also is in the Guinness Book of World Records for having "the greatest sales per unit area of any single food store in the United States." The store is also known for its customer-service policy, which greets shoppers at each store's entrance etched into a three-ton rock:

"#1. The customer is always right.

Built in 1989, this 6,347 square foot stucco-style family home has 5 bedrooms and 6 bathrooms. The current appraised value of the property is $5,515,300, according to public property records.
Links: www.bloomberg.com, en.wikipedia.org, www.linkedin.com, investing.businessweek.com
3,626 views