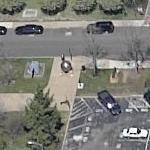 In 1962 the Office of Naval Research (ONR) and Woods Hole Oceanographic Institution (WHOI) began work on a more maneuverable submersible capable of operating at depths greater than 6,000 feet. Three 6-foot diameter HY-100 steel spheres were fabricated, and on 05 June 1964 the DSV-2 Alvin was commissioned. The sub proved its worth in 1966 by assisting in the search for and recovery of a US hydrogen bomb accidently lost in 780 meters of water off the coast of Spain. The three-place submersible Alvin", operated by Woods Hole Oceanographic Institution (in Massachussetts) for the Office of Naval Research, has four viewing ports, video and still cameras, one six function and one seven function manipulator, scanning sonar, and can be fitted with a variety of other specialized equipment. Since 1971 Alvin has been "loaned" by the Navy to Woods Hole. During a 1972-1973 overhaul, a new titanium personnel sphere was installed in Alvin to double the sub's depth capability to 3,658 meters (12,000 feet). Maximum operating depth was 4,000 m (13,100 fsw), but after a prolonged effort, in 1994 the US Navy approved an increase of Alvin's operating depth from 4 000 meters to 4500 meters. This depth increase results in about 25% more of the ocean floor within reach of Alvin, about 86% of the ocean basins. By 1994, the 30th year of operation, none of the original Alvin remained in use, since every component of the original vehicle had been replaced over the years, including the frame and pressure hull.
Links: fas.org
912 views