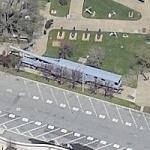 14-inch naval railway gun, one of only eight built at the Washington Navy Yard for use during Europe in World War I

Rail presented the perfect transport and firing platform for land based naval ordnance. The gun could be moved relatively quickly along the rail system and the recoil could be dispersed by allowing the carriage to hurtle down the tracks (sometimes up to 100 feet). In some cases, a piece of curved siding was actually used to aim the gun. These guns could fire up to thirty miles and were capable of reaching far into the enemy’s rear positions.
Links: www.worldwar1.com
1,180 views