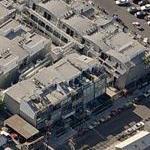 Cooper recently purchased a townhome in the Dogtown Station to use as an office for his production company, Indiana & 22nd.
Links: www.latimes.com
2,903 views