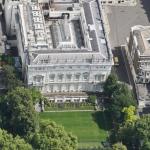 The family's largest holding is its EFG Bank European Financial Group in Luxembourg, a banking conglomerate with two main banking holdings that operate in many jurisdictions. The Group holds over 40% of EFG Eurobank Ergasias SA listed in Greece as well as over 40% of EFG International listed in Switzerland.
Links: www.forbes.com
3,242 views