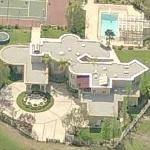 Brown had grown up with music, listening to soul records, and mimicking performances for his family, but his start in the music industry came at age 13 when he was discovered by Hitmission Records, a local production team that visited his father's gas station while searching for new talent. The team built a demo package for Brown, and was able to secure him an audition at Def Jam Recordings. that day, Brown was offered a deal by legendary label president LA Reid, but while negotiations dragged on, Brown also received offers from other labels, ultimately deciding to sign with Jive Records due to their success with other young pop-signers including Justin Timberlake and Britney Spears.

In 2005, at age 16, Chris Brown released his self-titled debut album which opened at number two on the Billboard 200 with first week sales of 154,000 copies, ultimately reaching sales of over two million copies in the United State and three million copies worldwide. The album was certified double-platinum by the RIAA.

Brown's second album, Exclusive was released in 2007 to generally positive reviews, and debuted at number four on the US Billboard 200 chart. "Kiss Kiss," the album's second single reached number one on the US Billboard Hot 100 chart, becoming Brown's second number one single following "Run It" in 2005. After recording new material, and finding success as a featured guest on hit songs by other artists including Jordin Sparks and Ludacris, Brown re-released Exclusive as a deluxe edition, with four new tracks, including the single "Forever", which reached number two on Billboard Hot 100. At the end of 2008, he was named Artist of the Year by Billboard magazine.

In 2009, Chris Brown was involved in a domestic abuse arrest with then-girlfriend Rihanna, leaving her with visible facial injuries which required hospitalization. He was charged with felony assault and making criminal threats, and pleaded guilty, accepting a plea deal to accept responsibility for the felony in return for community labor, five years' formal probation, and domestic violence counseling. After the incident, a fairly substantial public backlash resulted in Brown's songs being pulled from rotation on several radio stations, but ultimately, not irreparably damaging Brown's career.

Chris Brown is renting this home as of Summer 2014 and it is the former home of Mike Tavera, an American composer best known for his animation scores. He has also worked on countless television series, live-action films, and direct-to-video sequels. Chris Brown has a net worth of $30 million.
Links: en.wikipedia.org
6,509 views