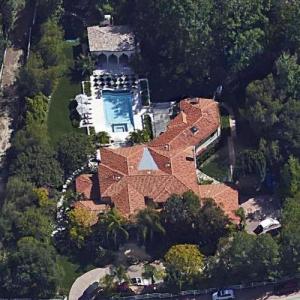 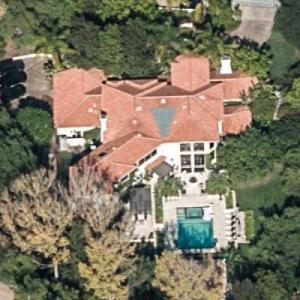 Bruce Jenner is a former US track star, who won the Decathlon during the 1976 Summer Olympics. He married Kris Kardashian, now Jenner, in 1991. The two separated in late 2013.

The couple purchased this home in 2010 for $4 million. It features 6 bedrooms and 8 bathrooms on a 67,584 square foot lot. The house was recently remodeled by LA designer Jeff Andrews.

Kris Jenner's net worth is estimated at $30 million. She made most of this as executive producer of the "Keeping Up With The Kardashians" reality TV show, as well as managing the careers of her daughters. Kris has also appeared on other TV shows including "Kourtney and Khloe Take Miami", "Khloe and Lamar", "Kourtney and Kim Take New York" and "America's Next Top Model".

Anonymous
@ 2012-06-13 23:39:28
This is Khloe and Lamar's house, but I do not think that they film the on the inside of this house. If you zoom over the house on the map. the pool that Lamar was learning to swim in during last season had a rock wall or grotto like wall and the pool in this map does not have this. Hmmm.

Anonymous
@ 2012-07-25 16:50:54
I don't think 'cpatterson22' gave the old address You can tell by the satellite picture that the link is to the house they show on the program. On Feb 25, 2012, HGTV ran a program called "Beautiful Homes" and this house was featured as Pilattzo De Sonnier located in Studio City 6 Brms/9 baths and 7500 Sq Ft. The inside looks nothing like the Bruce/Kris Jenner house on their show. The family is said to live in Calabasas on the show so they are lying and only using the De Sonnier exterior for photos.

jdubble07
@ 2013-01-19 06:02:10
This should finally settle the debate. On 1/18/13, the Kardashian's were victims of the new ''SWATting'' prank going around in L.A, where a prank call is made to 911 saying there has been a shooting at a celebrities' house only to have the SWAT team swarm the home. TMZ posted photos and video taken at the home, with Kris, Bruce, Kylie, and Kendall out front of the house.
http://www.tmz.com/2013/01/18/kris-kardashian-family-bruce-jenner-swatting-hidden-hills-gun/

Anonymous
@ 2016-05-15 15:15:07
I found the actual house they live in, on Zillow. It's in Hidden Hills. They've since remodeled the home, so the photos listed on Zillow don't reflect the show. It's plain as day, that this is their house, given the grand entrance double staircase, and the details listed in this article, of it being sold in 2010 for 4 million, exact square footage, lot size etc.. I would list the address, but I will honor their privacy, by not doing so. They do in fact live in the home they shoot the show in. They do show a different front of the house in the show, for privacy reasons I'm sure.

Anonymous
@ 2016-07-11 10:30:24
Lol just because they have their entire lives on TV... Doesn't mean they want people to know where they live...so if your lives were on TV, and you were just as popular and just as famous... You'd show your real house for all the crazies?? Doubt it.

Anonymous
@ 2020-07-11 02:19:48
In 2013 Kris Jenner & the Family welcomed Multi billionaire heir Towery "Tyree" M Burris-Hunt into there home. The heir is considered the wealthiest heir in America. As the J.P Morgan blood heir grandson & beneficiary of billionaire Johnny Bryan Hunt founder of J.B. Hunt Transportation.
He was recognized in 2013 as beneficiary heir of Famed Casey A Kasem estate trust. Kris Jenner overseeing many of the homes he inherited while the heir traveled living in Dubai.

Anonymous
@ 2020-07-11 02:34:22
⚠️100 % Truth. Kris & the Kardashians were involved with homes owned by multi multi billionaire heir Towery "Tyree" Maurice Burris-Hunt in 2013. The dual US Moroccan national is the wealthiest heir in America. He owns a reported billion + in CA real estate including Ignite house used by Dan Bilizerian. He owns the homes vlogged by Tri blend media Producer Michael and most of the homes seen on Million dollar listings LA. (He Co produced the show which includes his homes in NY as well). She took charge over Casey Kasems real estate empire in 2013 that he inherited. Including property in the hills . While media outlets reported a battle between Kasems daughter and finance/wife. He aided both individuals.